We’re here for you. Because we face issues too.

We’re here for you.

What are you facing today?


Can’t find your issue?
Talk to us.
It’s confidential.

I have 3 boys and I love being a mom. When expecting each of them I would often wonder who they would be, or what it would be like to be their mother, but I was not expecting to deal with postpartum issues after they arrived. Postpartum OCD happened to me three times. Here is my story.


What I Didn't Expect When I Was Expecting

I had been married to my best friend for 5 years when we decided to start trying to conceive. When we got pregnant, the timing was perfect. We were ready to embrace being parents.

My pregnancy was wonder-filled. I followed every step of my baby’s development, read children’s books, and played classical music to “the belly.” I kept very active doing aqua fit, stretch & relaxation classes, and even the swimming portion of a mini-triathlon! The whole pregnancy was smooth sailing. I even said, “If pregnancies are all like this, I want 10 kids!”

On November 6, 2005, at 5:30a.m., 25 hours after my water broke, and after 15 ½ hours of hard labour and an epidural, I gave birth to a bouncing baby boy, Sean. Although three weeks early, he weighed in at 7 pounds, 7 ounces. What an awesome moment! My husband and sister were with me, and other family & friends joined us moments after the birth. We were so happy.

After Sean was born, things changed. My immediate postpartum period can only be described as loopy! I was extremely emotional: crying one minute, laughing the next. I started to experience intrusive thoughts, which I later came to know were a part of Postpartum Obsessive Compulsive Disorder (PPOCD). Out of the blue I would have a “what if” thought about harming my baby. These thoughts were scary and disturbing. I loved my son and didn’t know where they came from. I lived in fear of myself, and when I looked at my son, I thought it was sad and strange that I had to include myself in the list of people he needed to be protected from. 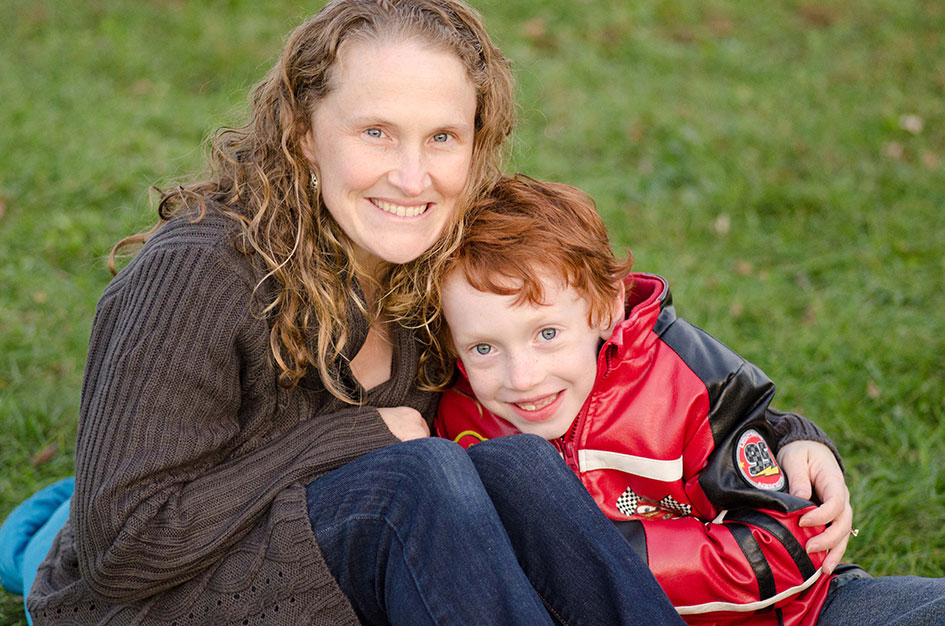 My husband was incredibly supportive and I started calling my mother and friends when those moments came up, which really helped me keep touch with reality. My mom recommended I share this issue with my doctor and the public health nurse. My doctor encouraged me to keep calling people as I’d been doing, but the thoughts didn’t go away. On my follow up call with the public health nurse, after her home visit, I told her that I was still having the scary thoughts. She was concerned and told me that she was legally obligated to call the Children’s Aid Society (CAS). While she assured me this did not mean that they would take Sean away from me, it was a concern in the back of my mind. This was not what I expected when I thought about becoming a mom!

Later that day the CAS intake worker arrived and interviewed me and my husband. She informed my doctor of her involvement and that eventually led to a referral to a psychiatrist to see what was really going on. Until I did so, I was never to be alone with Sean. It was a crazy fearful December, but being around family and at a conference during the holidays made it bearable.

I lived in fear of myself, and when I looked at my son, I thought it was sad and strange that I had to include myself in the list of people he needed to be protected from.

After the holidays I went to see the psychiatrist and a counselor who recommended I face those awful thoughts with truth and logic. When they came, I would remind myself, among other truths, that I was an excellent mother who loved her son. My logical self-talk would go something like this: “Since I’m having a scary thought about knives, if the knife stays in the kitchen and the baby stays in his room, NOTHING is going to happen to the baby, as long as he stays where he is, and the knife stays where it is.” As I spoke these truths to myself, they came less often and I needed to see my counselor less and less.

I learned to look for triggers. The thoughts tended to come when I was tired or alone, so I tried to rest when Sean slept. I made play-dates with friends and their little ones when my husband was working. I also let my friends know what was going on, so they could be there for me. As I tried to minimize the triggers, it helped the thoughts to decrease in frequency. By the time Sean was 4 ½ months old, the thoughts were basically a non-issue. I’ve had two more beautiful little boys since Sean, and lived through this struggle with both of them as well. Even though it was on my radar the second and third times, it still happened.

If I hadn’t sought help, I probably would have continued to suffer in silence. Who knows where those thoughts could have led? As one of my aunts said, “Sometimes it’s good to fall apart, because then we can get help for many different areas of our lives that are broken. Sometimes we don’t even know where we’re broken.”

Having a baby is a huge life-change, and we need all the help we can get. Do not be afraid to talk. I have found that as I talk about my experiences, I meet other women who have had similar experiences but did not have anyone else to talk to. Talking allows us to reach out for help and realize that we all struggle in different ways. Remember that bad thoughts don't make you a bad person or a bad mom, it's what you do with them that is most important. You can get in touch with a mentor who will listen and offer support to you by leaving your information below. Don’t suffer in silence - we can face this together.


You don't have to face this alone. Fill in the form below and one of our mentors will respond as soon as possible. It's confidential and always free. Our mentors are not counsellors. They are ordinary people willing to join people on their journey in a compassionate and respectful manner.

These issues can be hard to face. If you’re considering harming yourself or others, please read this!

Please fill out the form below so we can get in touch with you. All fields are required unless indicated.